Oh yeah, this is a big topic, at-least for me. All the frequent flyers will/should be interested in this topic. I'm sure all of you have heard at-least something about the TSA, and most of it should have been bad. Complaints, lawsuits and general disgust surround this organization. Is there a reason, or are the 'extremist liberals' at it again? Let's find out! 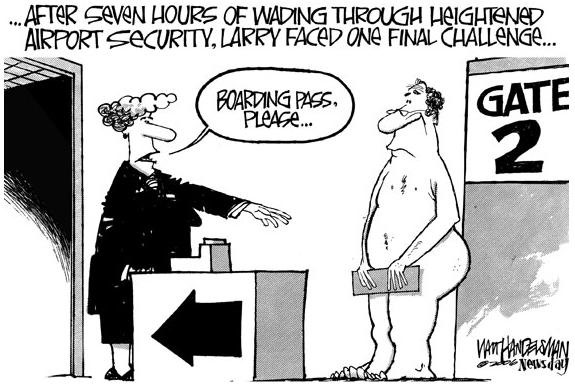 After the 9/11 attacks, the country was fraught in fear, and were willing to give up freedom for security. Benjamin Franklin said/quoted:

"Those who would give up Essential Liberty to purchase a little Temporary Safety, deserve neither Liberty nor Safety."

But of course, that's just nonsense; the terrorists are waiting to kill us because of our freedom. Uh-huh. And so the TSA was born. It was a response to the bombings and the fear that came with it. The organization was told to protect transportation, especially airline travel and prevent hijacking.

Did you notice my wording in the previous sentence?

"The organization was told to protect transportation, especially airline travel and prevent hijacking."

Yes! They are in charge of all transportation, not just airlines! As you'll see later on, the TSA oversees highways, railroads, buses, mass transit systems, pipelines, ports.

There are many types of TSA agents. They include:

The TSA have partnered with major suitcase companies to make locks that are openable and re-lockable. Why? Well, in case you didn't know, the TSA are allowed to break apart, disable, cut, strip any locks to search for potential threats. Yes, so now locks are useless.

Problems with the TSA

2. Secondly, the new AIT (Advanced Imaging Technology) units are a magnet to hate and disgust. All this new technology is fine and dandy, but it provides too much 'information' to the officer behind the screen.If you've seen any images then you know what I'm talking about.

3. A third cause for concern is the radiation associated with the new machines. Dr. Len      Lichtenfeld, deputy to another doctor, says: "This is a total body scan—not a dental or chest X-ray. Total body radiation is not something I find very comforting based on my medical knowledge. I can still remember getting my feet radiated as a child when I went to the shoe store and they had a machine which could see how my foot fit in the new shoes. We were told then that they were safe, and they were not." Dr. Dong Kim, chair of the department of neurosurgery at the University of Texas Medical School, says: "there is really no absolutely safe dose of radiation. Each exposure is additive, and there is no need to incur any extra radiation when there is an alternative."

4. Other causes for concern? The TSA are known to sleep on the job, not following proper measures, and even stealing money and items from passengers. A report on undercover operations conducted in October 2006 at Newark Liberty International Airport was leaked to the press. The screener's had failed 20 of 22 undercover security tests, missing numerous guns and bombs.

What then, pushes the TSA to continue their job? The number one reason that's cited is safety. But the TSA has never stopped a single terrorist attack.  Its methods are grossly ineffective.  In fact, security experts say we would be equally safe if we returned to pre-9/11 security levels. The data is all there, you just have to look for it.

I believe they are not as useful as stated. Ever since they have sprung into existence, I have not flown anywhere. I have been driving to my destination. Sure it may be long, and sure studies have shown that there a more deaths in accidents due to people not wanting to go through the ridiculous security checks, but to me it's worth the hassle and risk. Unless....unless the TSA totally take over the roads.

Want to protest the TSA? Read this article first.

And here is a gallery of comic's for you to "enjoy":