According to mainstream media reports, one of Barack Obama's White House spokesmen said this in response to the recent "free speech" trial in Russia:

"While we understand that the group's behavior was offensive to some, we have serious concerns about the way these young women have been treated by the Russian judicial system."

Land of the Free? Absolutely Not. – Tenth Amendment Center 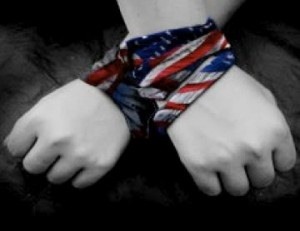 Is the US Government the worst rights violator on earth?
Well they sure don’t think so!