Mitt Romney has been on a winning streak recently, with small breaks by Rick Santorum. Ron Paul is slowly coming in third, but it's hard to say he's making a dent in those who support the top two contenders. Newt Gingrich has gone down, down to the bottom. He's still fighting to make another break in the race.

Mitt Romney talks about how Obama has totally destroyed this nation with Obamacare, rising gas prices, and more unemployment. Rick Santorum is a mirror image of Romney; his views may not be too similar, but he goes on and on about how Obama did everything wrong. But he also jabs at Mitt, saying how he's a flip flopper (he is indeed) and his policies pretty much match Obama's (indeed it mostly does with small reparations). Gingrich does the same, though is a bit 'modest' about it. Ron has of course, stayed consistent as any man can be, rallying to bring to light the corruption and lies that surround America.

But a major topic, in this race especially, is that of religion. The role it plays, both in the presidential as well as a nominee standpoint is quite huge. 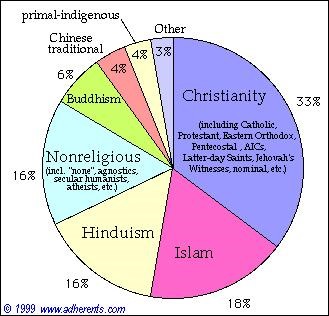 And a great example of this is Rick Santorum himself. He is a catholic, and its something he has consistently used to his advantage, whether he was losing or winning.As such, he has quite a big advantage in states that have a majority of catholics.

Religion has also played a great role in the Presidents office himself. His 'questionable' christian standing has taken much heat. Ever since he was noticed as a presidential nominee, small sparkles of unrest regarding his religion sprang to life. And the lack of a generally accepted birth certificate has only added fuel to the fire.

But here springs up a problem: where does religion end and politics begin? It's a hazy subject, especially since everyone uses religion as an excuse for something; in this case, winning the nomination.

Not surprisingly, voters affiliated to a certain religion would prefer to vote for a candidate who follows the same. It's a given. Christians, especially. It's a fine line for the candidates: you don't want to alienate a huge part of the primary vote, nor do you want to look intolerant.