Propaganda and indoctrination at it's peak. My friends, today, when I was browsing through the net for news, I noticed something on MSNBC. It was a very short article, with a title that just wasen't true. Before talking about it, let me tell you why this is important.

If you've been following the news lately, you may have heard that Ron Paul saying: "Moving forward, however, we will no longer spend resources campaigning in primaries in states that have not yet voted. Doing so with any hope of success would take many tens of millions of dollars we simply do not have." Yes, he's ending active campaigning in these states to conserve money for later.

Now that you're up to date, let me show you the article I found in it's entirety. 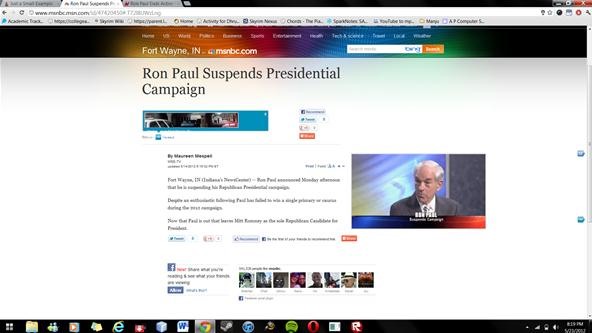 Yes, that what it says. "Ron Paul Suspends Presidential Campaign". I try not to take sides, but this is just  blatant lie. The article, if you cant see from the picture, reads:

Despite an enthusiastic following Paul has failed to win a single primary or caucus during the 2012 campaign.

Now that Paul is out that leaves Mitt Romney as the sole Republican Candidate for President.

Maureen Mespell sure has some explaining to do. The main mis-information in this article:

Note: I'm still asking around if the picture shown really aired on tv, and how fake it is.

How can a mainstream media company produce such an article? It's quite shameful really. And it's a great example of my belief that these media companies must NOT be trusted to the extent that people do. Maybe this article is a mistake, but if you notice, the article was edited after its first display.

Its small things like this that matter in our thinking toward a certain belief. Finding these anomalies isnt easy, but it isnt hard either. Just keep a lookout and stay sharp.