US can legally kill Americans in terror groups 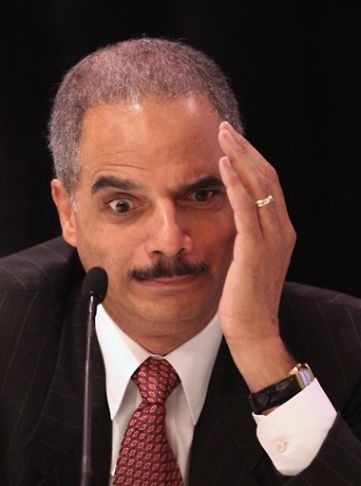 You read it right. The US can now target Americans who are supposedly part of terrorist groups. Here's my analysis of Attorney General Eric Holder points (keep in mind though, these are point's brought up by MSNBC, original article here):

"In this hour of danger, we simply cannot afford to wait until deadly plans are carried out, and we will not,"

There is no danger. There never was. This is just a tactic to cajole the population into obeying their commands. I will write a post soon to describe this tactic and to show you that there never really was any danger.

That, to me still doesn't give the administration to take a life in secrecy. An American-born Islamic cleric, Anwar al Awlaki, was killed in a U.S. drone attack in Yemen in late September. It's a different matter that he was a terrorist. What we must also see is that this could now happen to anyone, and they won't even know about it.

"We are at war with a stateless enemy,".

They are stateless because you have just stated so. Everyone has an origin, and fight for a purpose. No-one is stupid enough to simply give up their lives for nothing.

"The Constitution does not require the president to delay action until some theoretical end stage of planning, when the precise time, place, and manner of an attack become clear,".

That doesn't give anyone the power to breach the Constitutions power of the right to life in such manner. We have a right to information and documentation, and it should be provided and analyzed before anything continues. Further, I don't believe the President will/should have such power. Neither does the Constitution.

"The people don't want war, but they can always be brought to the bidding of the leaders. This is easy. All you have to do is tell them they are being attacked, and denounce the pacifists for lack of patriotism and for exposing the country to danger. It works the same in every country."