Politics(the Government) is built to accomplish a few things: maintaining order, providing necessities, operating businesses (stimulating the economy, trade), maintaining public relations and the most important of all, protecting the rights of the individuals it governs. It has a broad role, and as such, an array of bills, laws and rules to regulate itself and the country.

Now as expected, many issues arise from such a big system of administration. Medicare, Medicaid, ObamaCare, Social security; the list is endless. And then there are the people who run the government; politicians, we call them. Each have their own issues to contend with and push forward. Positions on these issues, therefore, are quite important. 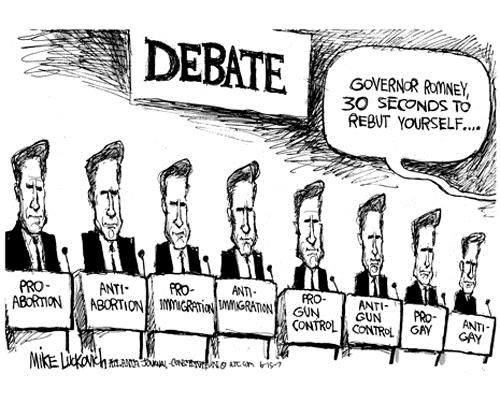 Especially in the race for becoming the President. And so we come to the point of this article. Flip Floppers. It's a name given to people who don't have a singular position on (in this subject) aspects of the government. Oh, I know who you're thinking about. Mitt Romney. To be honest, his name just sounds....fake.

Back to the point. Mitt has been under fire since the beginning of the 2012 election for being one of the most prominent flip floppers in the recent past. Let me make a point here.  Of course, politicians have every right to change their minds. An inflexible attitude is not always the sign of an effective leader. But too many flips can turn around one's image.

Want information on whether the clips in the video are true? Click Here.

And so it has come to light that Obama himself has changed his opinion. If you've been following the news about his change of view on gay marriage, then you know what I'm talking about. It's quite monumental, and he's the first President to support this issue. Of course, he has gotten a lot of fire for it, and the main reason is that this is a ploy/way to get re-elected, since many of Obama's supporters are homosexual. And reports show that this technique isn't working so far for his campaign.

"The latest New York Times/CBS poll showed that 26% of voters were less likely to support Obama as a result of his announcement, compared with 16% who said they were more likely to support him. But the small overall sample size and the lack of any valid sub-group data make those numbers fairly useless for purposes of predicting voter behavior. The poll did find, however, that a clear majority of Americans regarded Obama's declaration of support for same-sex marriage as largely a political move, which doesn't help him at all."

Such ideological changes are therefore, a normal part of a good and flexible government. Obama hasen't done this much and this looks like a smaller example. But people like Mitt (who I think is on the extreme side) show that anything is possible these days. You can change your views on issues as many times as you want, and people will still elect you (of at-least take you far enough). Personally, I think he will be shot down by Obama precisely because of this flip flopping. Is going to be fun to watch. So watch out and stay updated on their positions; except for Ron Paul. You know what he wants, when he wants it, and how he's gonna do it. A++.